The linguistic process of inserting one word into another is called infixation. Although it’s essential to some languages, infixation in English is largely limited to inserting expletives, which is called expletive infixation. 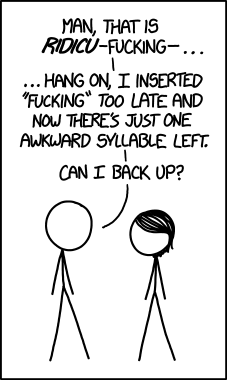 Like many grammatical rules, infixation isn’t something that’s explicitly taught (similar to the ordering of adjectives). Instead, speakers unconsciously learn the latent rules behind expletive infixation. This remarkably leads to consistency between speakers on…

As for why abso-frickin-lutely works but not *ab-frickin-solutely, the most widely accepted linguistic model proposes that infixation depends on which syllables in a word are stressed, called its prosodic structure.

Using a dictionary of pronunciations and a statistical model of word stress, it’s possible to derive the prosodic structure for almost any word—even made-up ones. So as part of my exploration into computational linguistics, I decided to create a fun micro web app that automates the process of expletive infixation:

Give it a few sentences and some pseudo (or real) expletives and it’ll magically insert them into your words. As a novelty feature, you can even infix emoji, creating monstrosities like abso-😂-lutely.

And if you’re a developer who’s interested in using results from the Infixer for building a something-or-another, I’ve also exposed the API and its documentation.

Get an email around every six months when I post.