Every day at 11:00 AM my iPhone rings. With the “seamless” “magic” of Apple’s Continuity, the ringing quickly spreads to my personal MacBook, work MacBook, iPad, and Apple Watch. 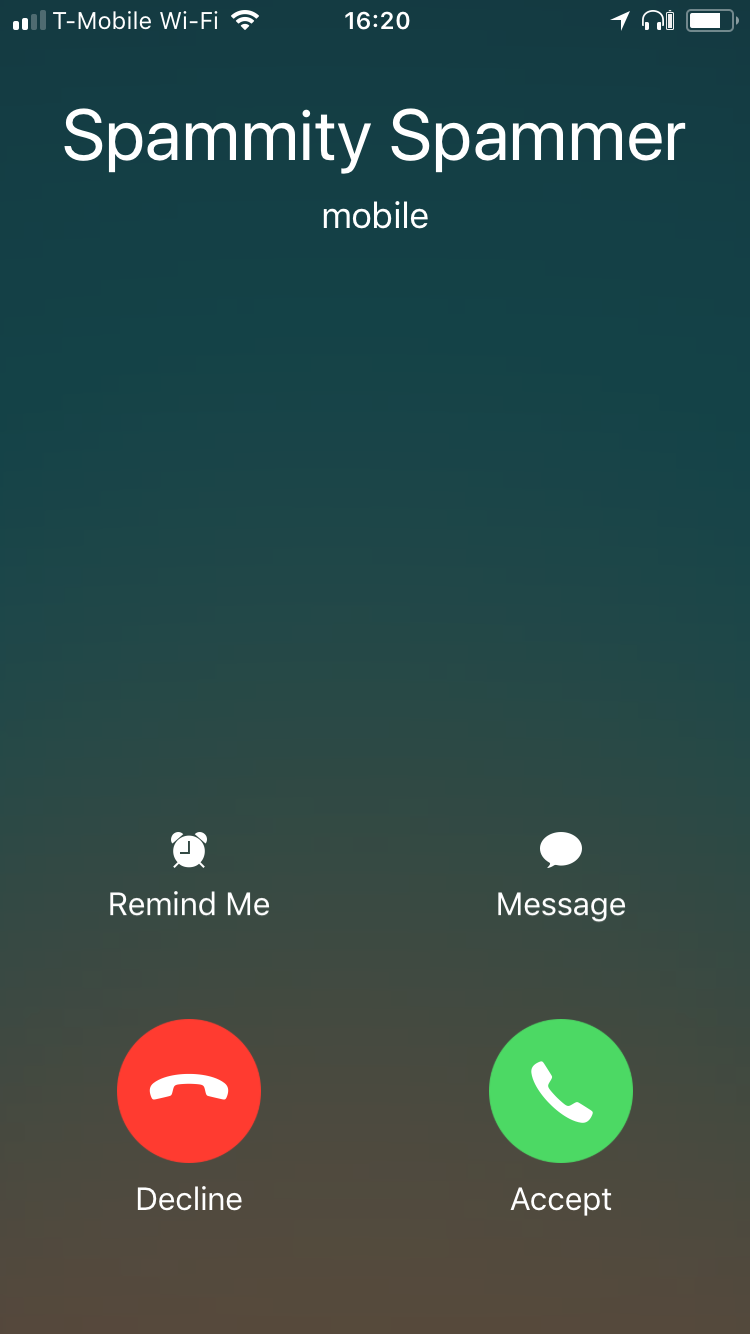 “This is your last warning regarding your car insurance…”

I don’t own a car. I wouldn’t mind if this happened once or twice a month, but I’m receiving upwards of two spam calls per day. It holds my devices hostage until I decline the call.

I first tried the most obvious solution: caller ID-based blocking. Apple introduced CallKit in iOS 10, allowing apps to blacklist up to 2,000,000 numbers[1]. I downloaded the two most popular call blocking apps on the App Store to test the method’s efficacy: Truecaller and Mr. Number. However, neither could identify (much less block) more than 10% of the spam calls I previously received[2]. Quite disappointing.

Since using commercial off-the-shelf solutions wasn’t an option, I had to look elsewhere. A few days ago I started working on my first attempt to stop the deluge of spam calls. I call it Carbon Call.

The system acts as a kind of virtual receptionist. It plays a pre-recorded prompt phrase for callers and then validates their answer using speech recognition on a set of keywords. For example:

Prompt: “Please provide the name of the person you are trying to reach.”
Valid keywords: “Andrew” and “Chidden”

Adjusting the prompt and keywords allows the system to block anything from only robocalls to people who dislike Star Trek. For callers providing caller ID, the system automatically white-lists their number if they pass the test[3].

Once the system verifies that the caller isn’t a spammer, my phone rings and I’m connected in under ten seconds. If I’m not available to answer the call, Carbon Call also handles voicemail recording and notifications.

It’s quite simple but works remarkably well. In the past two days I haven’t received a single spam call. I put together a short audio demo showing the call flow[4]:

Carbon Call needed to meet very specific requirements which shaped how I designed the system. These are the current marquee features:

For the proof of concept, I specifically designed the system to accommodate a single user: me. Depending on how much interest there is in Carbon Call, I’ll consider either expanding and optimizing the project or just open sourcing it.

I’ll make a post on this site when I come to a conclusion on how to proceed. I suggest subscribing, or you can just check back in a few weeks.

To understand the architecture, we can trace the path of a Carbon Call-protected conversation between Alice and Bob. Alice is calling Bob’s iPhone. 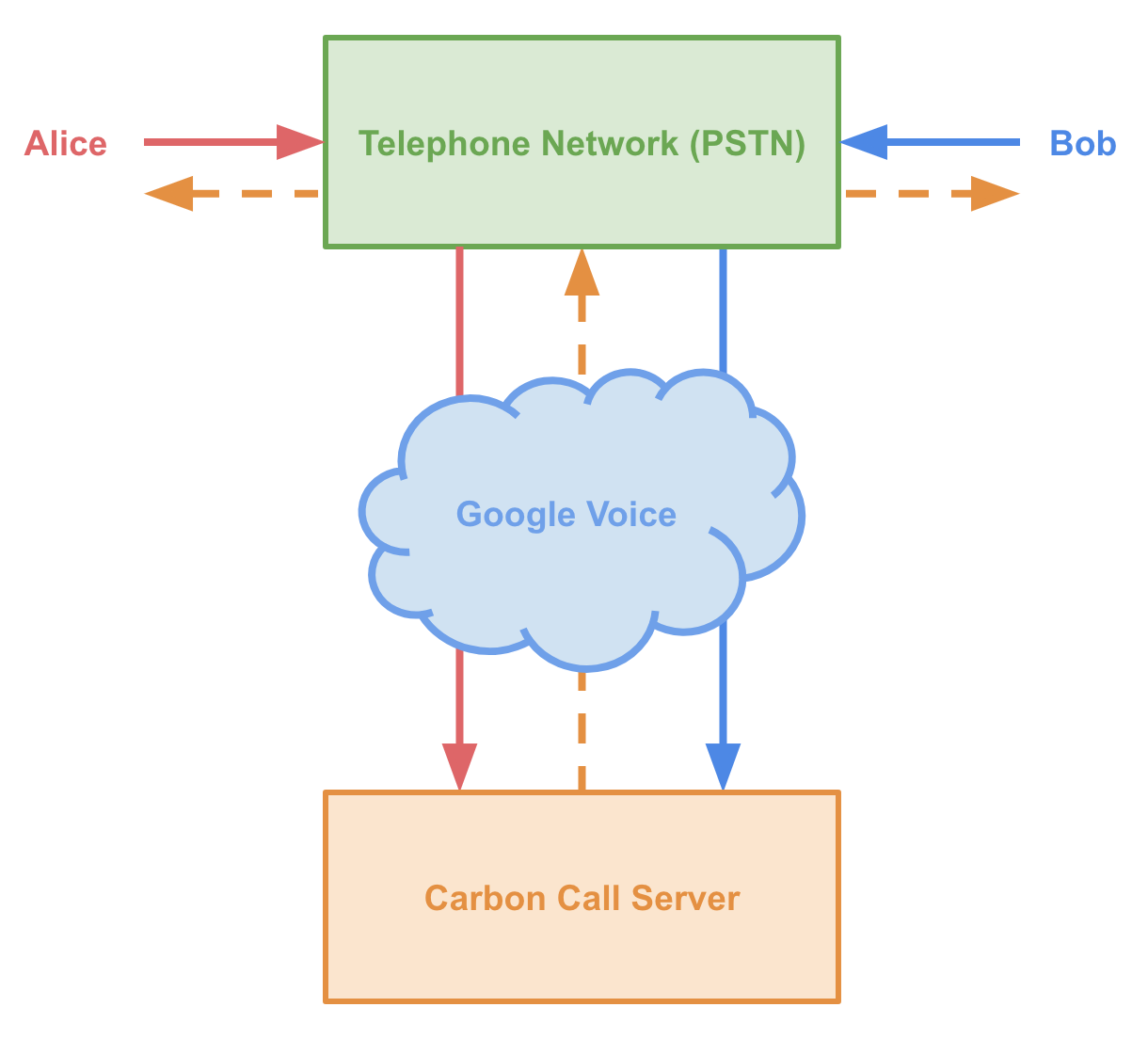 Let’s look at the implementation of each step:

Call forwarding from the iPhone to Google Voice allows Bob to retain his old number. Most VoIP services do call forwarding in the reverse direction, forwarding calls received by the VoIP service to your iPhone. For iPhones on GSM networks[9], iOS conveniently has a graphical interface in Settings > Phone > Call Forwarding. 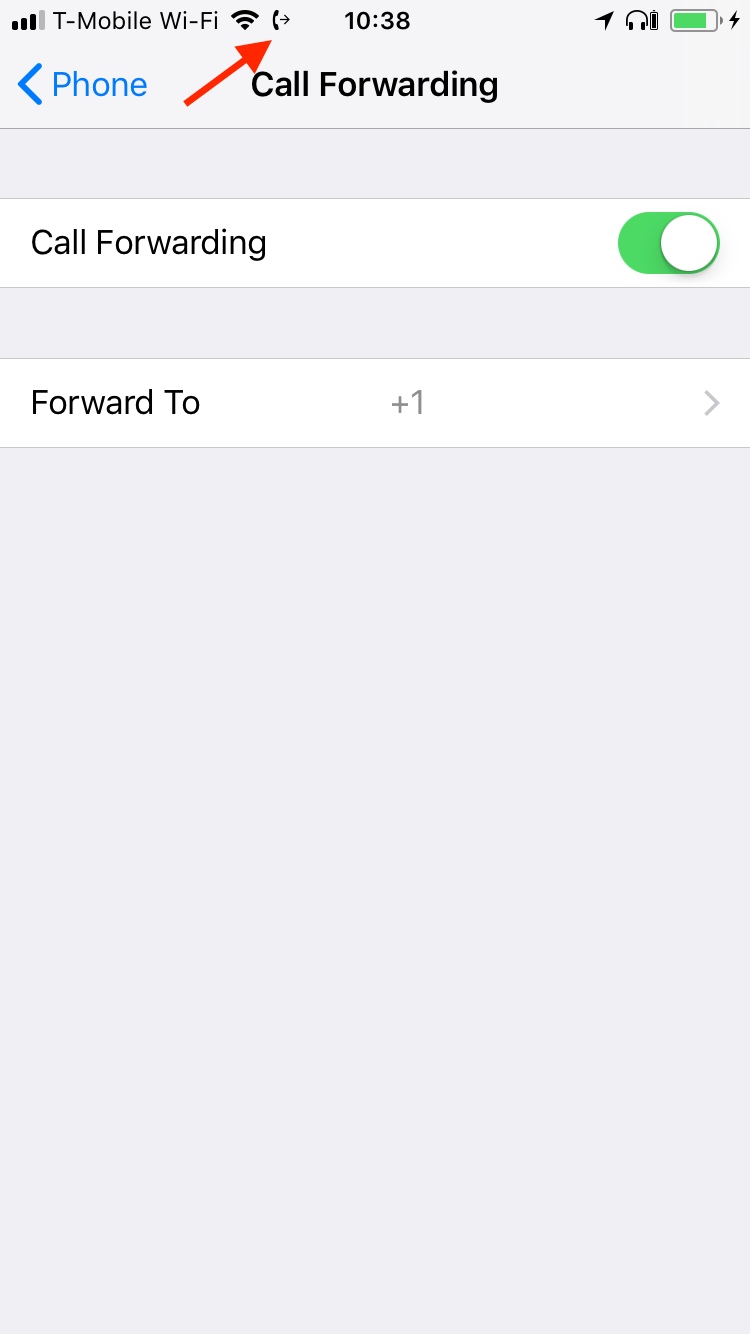 When call forwarding is enabled, iOS displays a statusbar icon of a phone with a right-facing arrow.

Once the call arrives at Google Voice, it propagates to the various audio streaming clients, namely Google Talk and Hangouts. The Carbon Call server uses Selenium, a web automation framework, to headlessly run instances of Hangouts in Google Chrome.

This was the first time I used Selenium, but I found it surprisingly easy to get everything working[10]. I did encounter a few issues though:

The server plays pre-recorded voice prompts and then records the caller’s response. For speech synthesis, I’m using snippets recorded from Google Translate’s speech output. For speech recognition, I simply send the recordings to GCP’s Speech API to process and return a transcript. A few things I discovered with the Speech API:

Since Bob enabled call forwarding, it’s not possible to directly call his number. The server could bypass Bob’s forwarding rules by initiating a new Hangouts VoIP call, but I want all connections to route over cellular voice.

Instead, Carbon Call uses a custom iOS client able to receive remote push notifications. When Alice passes the tests on the server, Bob receives a push notification causing his iPhone to play a custom vibration pattern and ringtone for thirty seconds.

To accept Alice’s call, the app prompts Bob to call his Google Voice number with a single tap. iOS displays the alert regardless of where Bob is in iOS, including the lock screen. 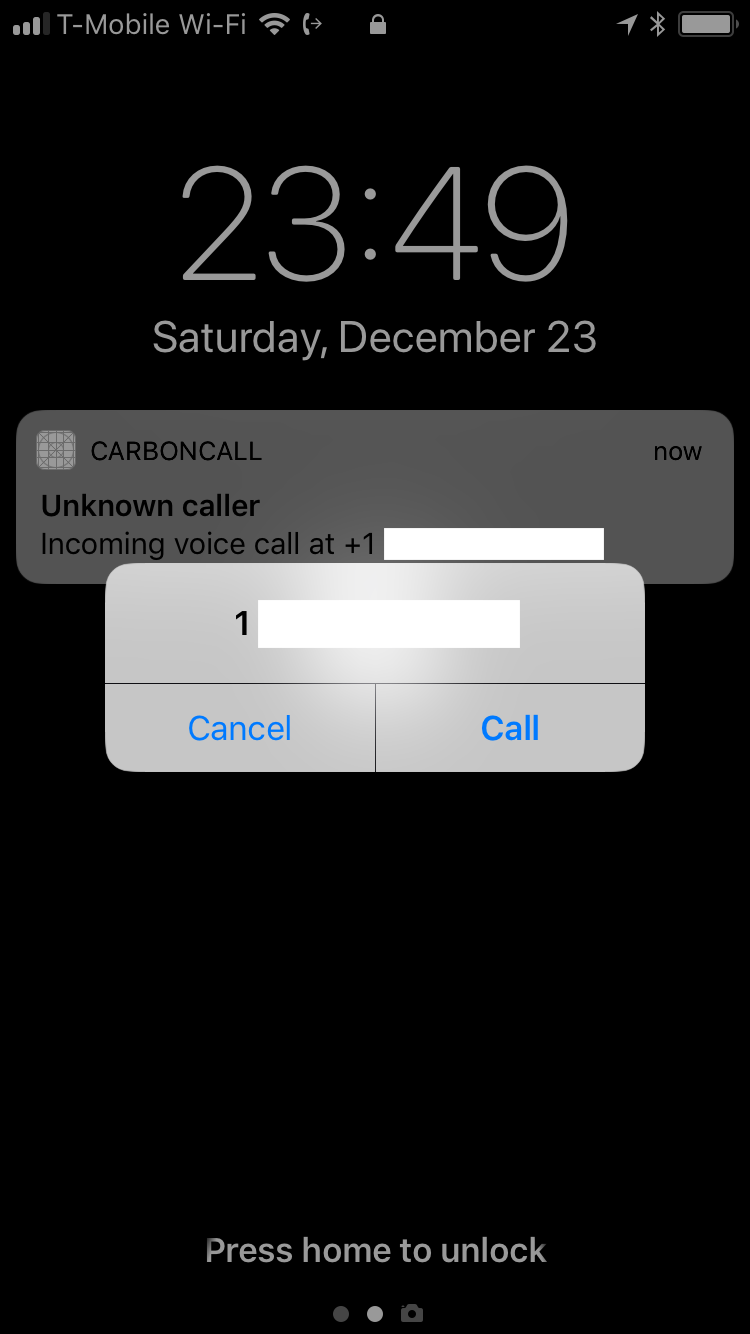 When Bob calls his Google Voice number, the server needs to create a conference call between Alice and Bob’s separate lines. Conference calling should be trivial and accomplished with a built-in option, but Google Voice no longer supports this feature for web-based Hangouts clients[11].

Instead, the server initiates two separate Chrome instances (one for Alice and one for Bob), and uses a set of PulseAudio modules to route the audio between them.

There’s a lot that goes on between Alice dialing Bob’s number and Bob joining the call. While I spent the first day on research and development, the second day was spent on streamlining the experience. Small things such as adding two attempts to the caller validation helped tremendously in smoothing out interactions.

After the system verifies that Alice isn’t a spammer (either through Bob’s prompt or via whitelist), Alice needs to wait a moment before Bob connects. Playing some kind of hold music to keep Alice on the line is an obvious solution, but the specific type of music makes a difference.

Due to compression along the phone network and conversion process from digital to analogue, most music sounds utterly horrible. The Strauss Horn Concerto No. 2 becomes the Harmonica Concerto No. 2, and Festive Overture becomes decidedly not festive.

Phone audio compression algorithms optimize for the voice frequency band (300 to 3400 HZ), but music usually covers a much larger range of frequencies. After playing a dozen different tracks over the phone, I finally settled on a modified version of Resignation by Kevin MacLeod. It’s a slow solo piano piece in the middle of the frequency range, making it a good fit for hold music:

Using Audacity’s frequency analysis tool, we can see the difference between the first thirty seconds of Festive Overture and Resignation's frequency ranges: 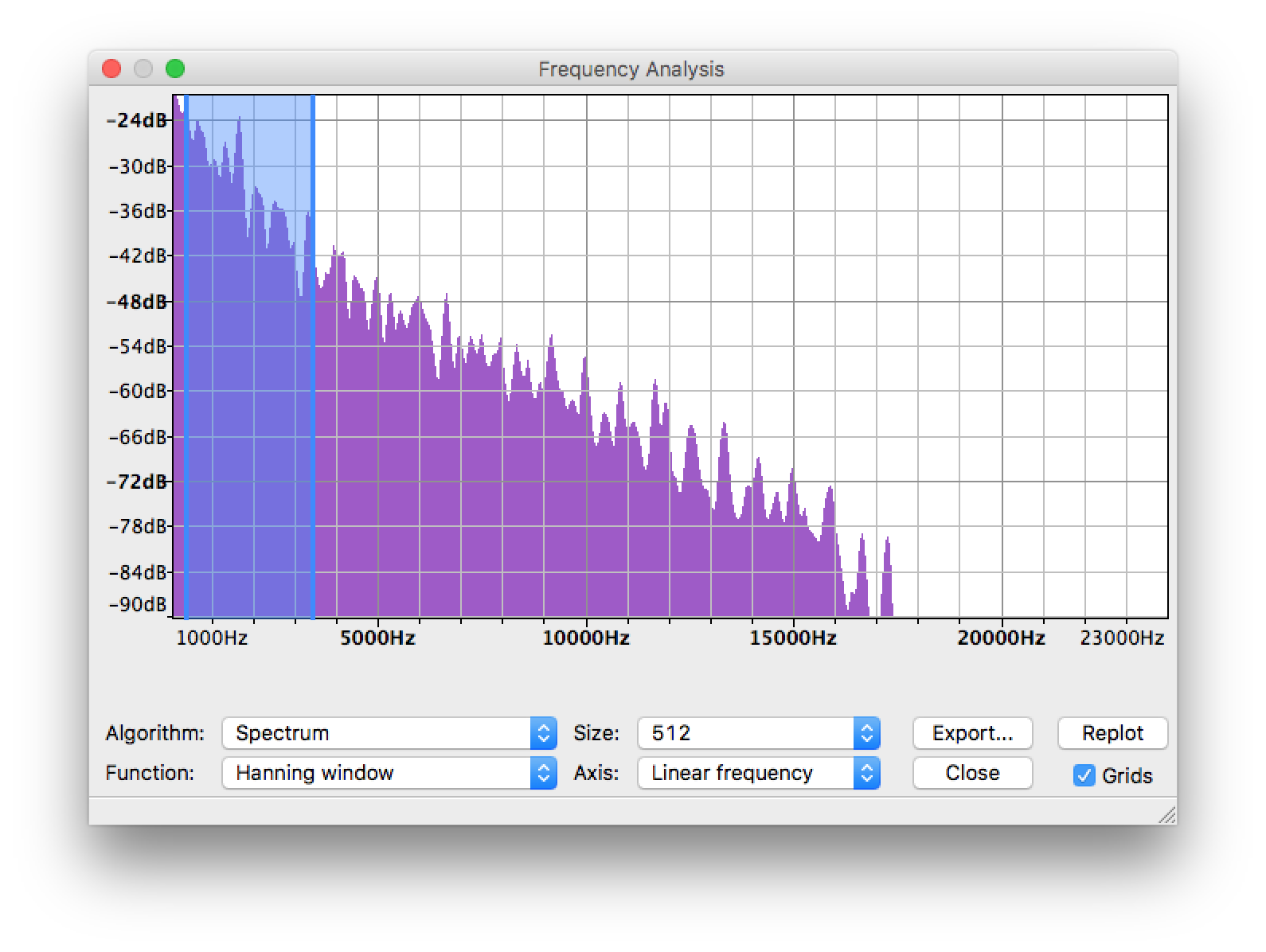 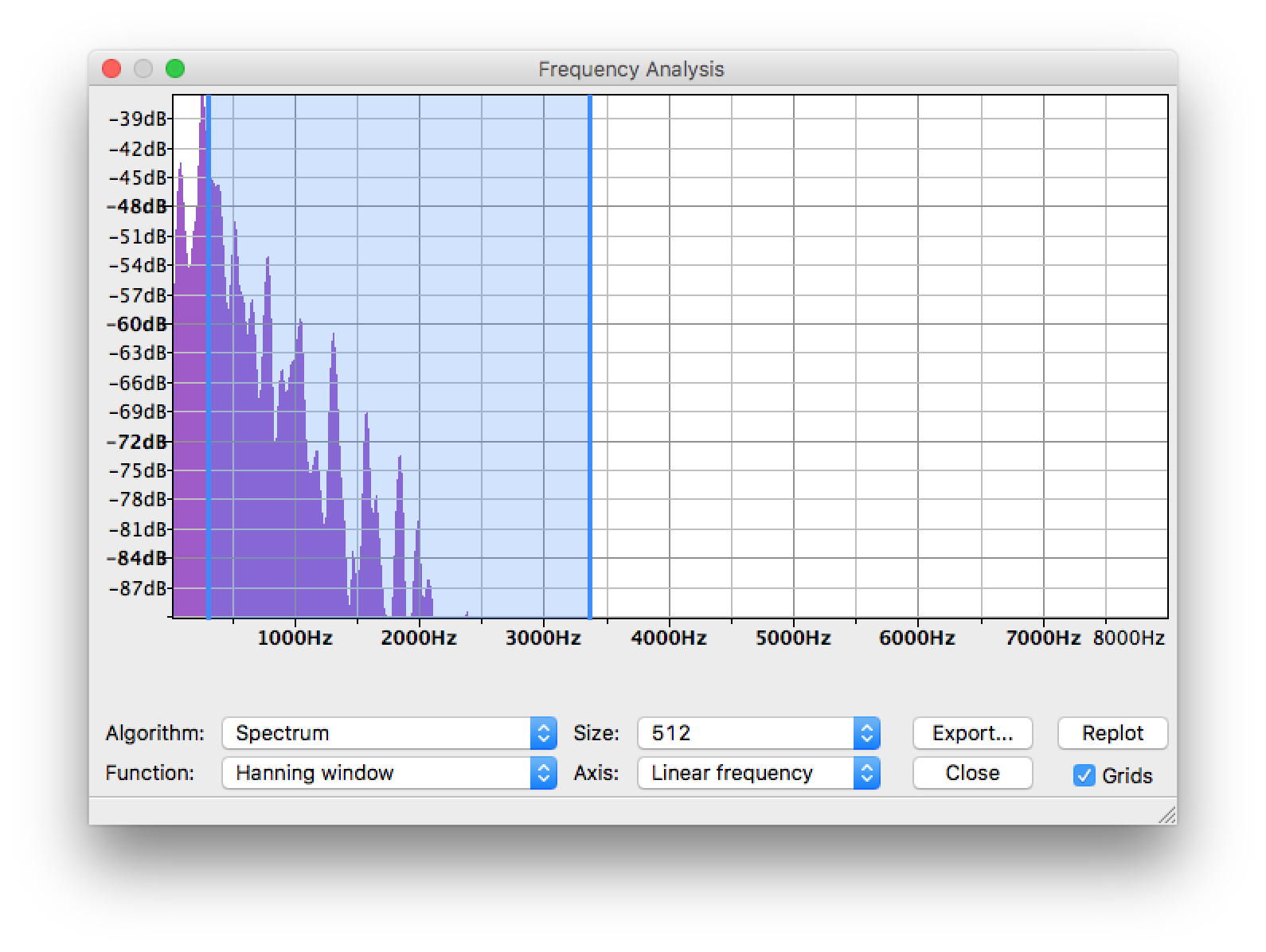 80% of Resignation falls between 300 and 3400 HZ, with minor clipping expected in the bass range (< 300 HZ). In contrast, around 80% of Festive Overture will be clipped or heavily distorted starting from the upper mid-range. My version of Resignation still doesn’t sound the greatest when played over the phone, but it doesn’t make your ears bleed either.

It’s not all milk and honey in the walled garden of Carbon Call. There’s still a few challenges with the current version of the system:

Solving these problems require building or purchasing access to a custom VoIP network. It’d be a lot of work and essentially a complete re-write. For the time being, I’m satisfied with the current setup as a proof of concept. ♦

Get an email around every six months when I post.